Objective: To compare the e ectiveness of carbetocin with oxytocin with respect to maintain adequate uterine tone and to reduce the incidence and severity of postpartum haemorrhage. Moreover safety, adverse e ects and the need of additional medications were evaluated. Methods: Prospective controlled clinical trial. We compared the e ect of a single dose of carbeto- cin (n = 55) with oxytocin infusion (n = 55) in a women popula- tion undergoing to elective caesarean section with regional subarachnoid anaesthesia with at least one risk factor for post- partum haemorrhage. Results: The mean ± SD of postoperative pain in the day of surgery in carbetocin group was signi cantly lower than in oxytocin group and remained signi cant till the third day after caesarean section. In the day of surgery and the rst day after surgery, women of carbetocin group who needed analgesic drugs were signi cantly lower than women of oxytocin group. The di erences of diuresis and of diuretic drugs need were not statistically signi cant between the two groups. Con- clusions: A single carbetocin injection is e cacious and safe on the maintenance of uterine tone and on the limitation of blood losses, in peri- and in postoperative period. In addition, carbe- tocin was able to reduce pain perception during postoperative days improving quality life of women.

Postpartum haemorrhage (PPH) is de ned as blood loss of at least 500 ml a er vaginal delivery and 1000 ml a er caesarean sec- tion (CS) and/or the need for a blood transfusion within 24 h of delivery [1,2]. It occurs in 5% of all deliveries [2,3] and represents the most important cause of maternal morbidity and mortality worldwide [3–6]. e risk of PPH is much higher for women un- dergoing CS [7]. Uterine atony is the rst cause of haemorrhage at the time of delivery, followed by genital tract injury and retained placenta necessitating manual removal [1,8]. Risk factors for PPH, such as grande multiparity, multiple pregnancy, polyhydramnios, foetal macrosomia, uterine miomas, placenta praevia, prolonged labour, chorioamnionitis and previous PPH, have remained rela- tively constant [1,2].

Despite evidence that active management of the third stage of labour reduces the incidence of PPH, expectant or physiological management are still widely practised. Factors accounting for this situation include the desire for a more natural experience of childbirth, the philosophy that active management is unnecessary in low-risk women, and avoid- ance of the adverse effects of conventional uterotonic agents [6,9–11]. In contrast, active management involves the clinician intervening in the process through three interrelated but in- dependent processes: (1) the administration of a prophylactic uterotonic (oxytocic) drug; (2) cutting and clamping the cord shortly after birth of the infant and (3) controlled traction of the umbilical cord [2,4,6].

Current strategies for preventing PPH include the prophylactic use of uterotonic agents to enhance natural uterine contraction and retraction following CS and in the third stage of labour for vaginal delivery [2,4,6]. Oxytocin is the most widely used utero- tonic agent [6,7], but it has only a half-life of 4–10 min [12] and must be administered as a continuous intravenous infusion to achieve sustained uterotonic activity.

Recent interest has focused on the prophylactic use of the oxy- tocin receptor agonist carbetocin [12–16].

Carbetocin is a long-acting synthetic analogue of oxytocin with uterotonic activity resulting from its binding to oxytocin recep- tors on the myometral cells [17,18] and it is currently approved in 23 countries for prevention of uterine atony and excessive bleed- ing following caesarean delivery in spinal or epidural anaesthesia [12]. It can be administered as a single-dose injection, either in- travenously or intramuscularly [19]. Intravenously administered carbetocin has a half-life of ~40min, around 4–10 times longer than that reported for oxytocin [20]. Adverse events reported by at least 10% of women who received prophylactic intravenous carbetocin following caesarean delivery were headache, tremor, hypotension, ushing, nausea, abdominal pain, itching and feel- ing of warmth [12]. Uncommon or sporadic adverse events were tachycardia, sweating, dizziness, chest pain, vomiting, metallic taste [12].

A case–control study involving pregnant women at risk for PPH was conducted to compare the e ectiveness of a single intravenous (i.v.) injection of carbetocin with that of oxytocin i.v. infusion with respect to intraoperative blood loss, ability to maintain adequate uterine tone and to reduce the incidence and severity of PPH. e two treatments were also compared for safety and adverse e ects, and for the need of additional medications.

is was a prospective controlled clinical trial conducted between 1 June 2009 and 31 May 2010. We consecutively enrolled at the Department of Pediatrics, Obstetrics, and Reproductive Medi- cine, University of Siena, Siena, Italy a group of pregnant women (n = 110) undergoing to CS with at least one risk factor for PPH. e patients were divided in two groups (n = 55) with blinding to the study medication.

Each women had a starter intraoperative dose of analgesia with i.v. buprenorphine (0.3mg diluted in 100ml of saline solution) and paracetamol (1 g i.v.) administered in 15 min at the end of CS. Postsurgery analgesia was set with i.v. elastomeric pump for 30 h containing buprenorphine 0.9 mg. e analgesic rescue dose was paracetamol (1 g i.v.) administered in 15 min (maximum dose 1 g every 6 h).

We compared the e ect of a single dose (100 μg i.v.) of car- betocin with oxytocin (10 international units (IU) i.v. followed by 20 IU i.v. infusion in 24 h. e study medication (carbetocin or oxytocin) was diluted in 10ml normal saline and adminis- tered slowly (over 30–60 s) intravenously by the anaesthetist a er the birth of the baby before placental delivery. e slow administration has been shown to reduce the potentially harm- ful haemodynamic e ects of oxytocin [20,21] (and presumably carbetocin).

Serum haemoglobin levels were documented by comparing the maternal haemoglobin concentration on admission to hospi- tal with that measured 24 h a er delivery.

Postoperative pain and the need of analgesic drugs were evalu- ated in Day 0 (day of surgery), Days 1, 2 and 3 a er CS. e perceived pain was evaluated by a Visual Analogic Scale (VAS) that visually represents the magnitude of pain warned by patients. e amplitude is represented by a line, usually 10cm long, in which one end indicates the absence of pain and the other represents the worst pain imaginable. e scale, which contains from 0 to 10, is completed by the patient, who is asked to draw a line on the sign representing the level of pain experienced. We considered a value ≥4 the minimum score for administration of the rescue dose analgesic drugs.

e diuretic drug that we administered in case of oliguria is de ned as a urine output <1 ml/kg/h (furosemide 25 mg i.v.).

e main clinical and demographic characteristics of the study population are summarized in Table I.

Regarding the following parameters: intraoperative blood loss, uterine involution and tone, amount of lochia, vital signs and se- rum haemoglobin and adverse e ects, there was not statistically signi cant di erence between carbetocin and oxytocin group. In particular, intraoperative blood loss was >2000 ml in one case of twin pregnancy and in one case of triplet pregnancy in study and control group, respectively; however, there was no need for blood transfusion. 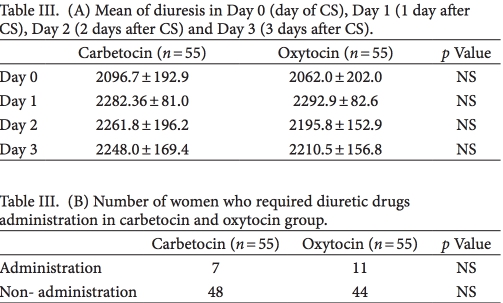 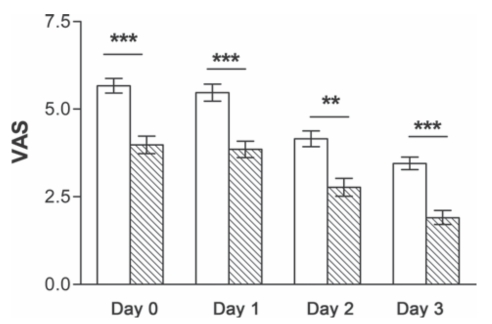 In 11 women of oxytocin group and in seven women of car- betocin group the diuresis of the day of CS was <1ml/kg/h and diuretic drugs were required. e di erences of diuresis and of diuretic drugs need were not statistically signi cant between the two groups as summarized in Table III. None of the women re- quired diuretic drugs during the rst, second and third day a er surgery.

Two parameters were studied for the rst time: abdominal pain and diuresis. In none of previous studies, the level of abdominal pain and the use of analgesic drugs a er CS were considered. Our data showed that the level of abdominal pain perceived a er use of carbetocin a er delivery by CS was less than a er use of oxyto- cin. Indeed in carbetocin group small number of women than in oxytocin group had a VAS ≥4. is reduced pain perception was statistically signi cant during all the days of hospitalization a er CS. Moreover, the need of analgesic rescue dose of paracetamol was signi cantly reduced in the carbetocin group. Like oxytocin, carbetocin selectively binds to oxytocin receptors in the smooth muscle of the uterus, stimulates rhythmic contractions, increases the frequency of existing contractions and raises the tone of the uterus musculature [19]. In conclusion, the lower drug quantity administrated and the characteristic of contractions stimulated by carbetocin may explain the lower level of abdominal pain.

The chemical structure of oxytocin resembles that of the an- tidiuretic hormone (vasopressin), so it could have a moderate an- tidiuretic e ect and currently, there were no studies in literature that evaluated the diuresis of women a er administration of car- betocin during CS [19]. It could be associated with hyponatremia and water intoxication a er prolonged administration of high doses, especially when given with a dextrose solution instead of a salt solution [25,26]. Animal studies had shown that carbetocin had some antidiuretic activity (vasopressin activity: <0.025 IU/ ampoule). According to our results, carbetocin had a moder- ate antidiuretic e ect without statistically signi cant di erence in 24h urine output a er surgery between women treated with carbetocin or oxytocin. e use of diuretic drugs was less in the carbetocin group than in the oxytocin group but with no signi - cant di erences, maybe because of the limited study population. is preliminary data showed that carbetocin had a safety pro le comparable with oxytocin but further investigation may be neces- sary to evaluate the amount of antidiuretic e ect of carbetocin.

In conclusion, a single carbetocin injection is e cacious and safe on the maintenance of uterine tone and on the limitation of blood losses, in peri- and in postoperative period, during a deliv- ery by CS. In addition, carbetocin was able to reduce pain percep- tion during postoperative days improving quality life of women, who were able to provide care to newborn a er CS. Moreover, the decrease of postsurgery pain that has been demonstrated a er the use of carbetocin could lead to a reduction in the use of opioid drugs for postsurgery analgesia, thereby reducing side e ects as nausea, vomiting, dizziness, constipation, drowsiness, itching and so on due to the use of this type of drugs.